While the NFL season is still far away, it’s never too early to get a head start on researching for the fantasy football season. As most of our readers know, in order to succeed in fantasy football, you must put in extensive research into the players before the season starts. The goal of this article is to give you the info on all the fantasy assets that the Chargers have on their roster.

For reference purposes, we are going to be using PPR formats for the players, except QBs. This is due to the growing number of PPR leagues in the fantasy world.

Rivers finished the 2017 NFL season with 270.5 fantasy points in standard formats, which was good enough for the 8th best QB in fantasy football last season. Rivers threw for 4,515 yards while keeping a 28:10 TD/INT ratio. To some, it was a disappointing season, but given the circumstances that Rivers faced (New stadium, new coach, new scheme), it was an admirable season.

Looking forward to the 2018 season, Rivers at the ripe age to 36, looks to lead the hungry Chargers to the “promised land”. With plenty of young talent on the offense (Keenan Allen, Mike Williams) and a revamped offensive line (Mike Pouncey and Forest Lamp). Fantasy owners should expect a Top 5 fantasy season from rivers. 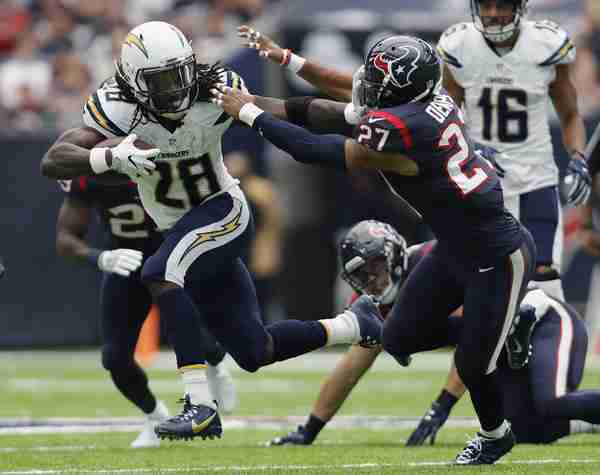 Melvin Gordon started the year slow, but he finished with a bang. He scored 288.1 fantasy points in the 2017 Season, which was good enough to be the 5th best fantasy RB. Gordon became a focal point of Anthony Lynn’s new “run-first” scheme, this change suited Gordon well and he thrived in the environment. One of the only knocks on Gordon is his YPC is below league average. It is odd to see a top 5 RB with that low of a YPC, but he is able to make up for it in TDs and catches. Gordon was not a receiving back when he was drafted out of Wisconsin University, but it is something that he has worked on since being drafted and he had 58 catches last season with 4 receiving TDs. This gives him a huge boost to his fantasy stock in PPR formats. After finishing the season with 1,581 total yards, 58 receptions, and 12 total TDs, Gordon looks to dominate the fantasy landscape once again in 2018.

Austin Ekeler had an important role in the Chargers rushing attack last season, the former undrafted RB racked up 539 total yards, 27 receptions, and 5 total TDs. Playing a small role in the offense Ekeler was able to make a big impact when Gordon went down late in the year. It’s unclear what kind of role Lynn has planned for Ekeler, but he will be utilized in some way.

Keenan Allen is the creme of the crop for the Chargers wide receivers, in fact, he was one of the best pass catchers in the NFL last season! After going down in the early part of the 2016 season due to a freak injury, Allen made an impressive comeback in 2017. Posting 1,393 yards, 102 receptions, 6 TDs, which was good enough to score 284.2 points making him the 3rd best Wide Receiver fantasy football last season. A large number of his points came from a three-game stretch after the bye week, where he put up, 33 catches, 436 yards, and 4 TDs. It was such a dominant stretch that his uniform and cleats went into the HOF, to commemorate the achievement. Keenan doesn’t always get the high volume of TDs that most elite receivers get, but he gets most of his points from his receptions and yardage. Still, at the young age of 26, expect a similar monster season from Allen.

Tyrell Williams is often underrated by most NFL and even some Chargers fans. What he has been able to do in his two seasons with the Chargers is remarkable and underappreciated. In his first two full-time seasons with the Chargers, Tyrell put up 1,787 yards, 112 receptions, 11 TDs. While he had a down year, he still managed to put up 137.8 points which were good enough to be the 45th best fantasy WR. With Allen’s injury concerns, Williams is a reliable fantasy option to keep around.

Mike Williams was drafted 7th overall by the Chargers in the 2017 draft, there were high expectations going into the season, then, the injury bug hit. Williams was sidelined with a major back injury for most of the season, so his rookie year was wasted. There is still a lot to love about the profile of Williams, he has a tall frame and is a serious red-zone threat. It’s not hard to see why he was regarded as one of the best draft prospects in 2017. I can see a lot of similarities to former Charger Malcolm Floyd, with similar size and ability, but Williams possesses greater speed. There are a lot of people writing Williams off, but I suggest taking a late-round flyer on him. I know the Chargers have big plans for him if he can stay healthy. 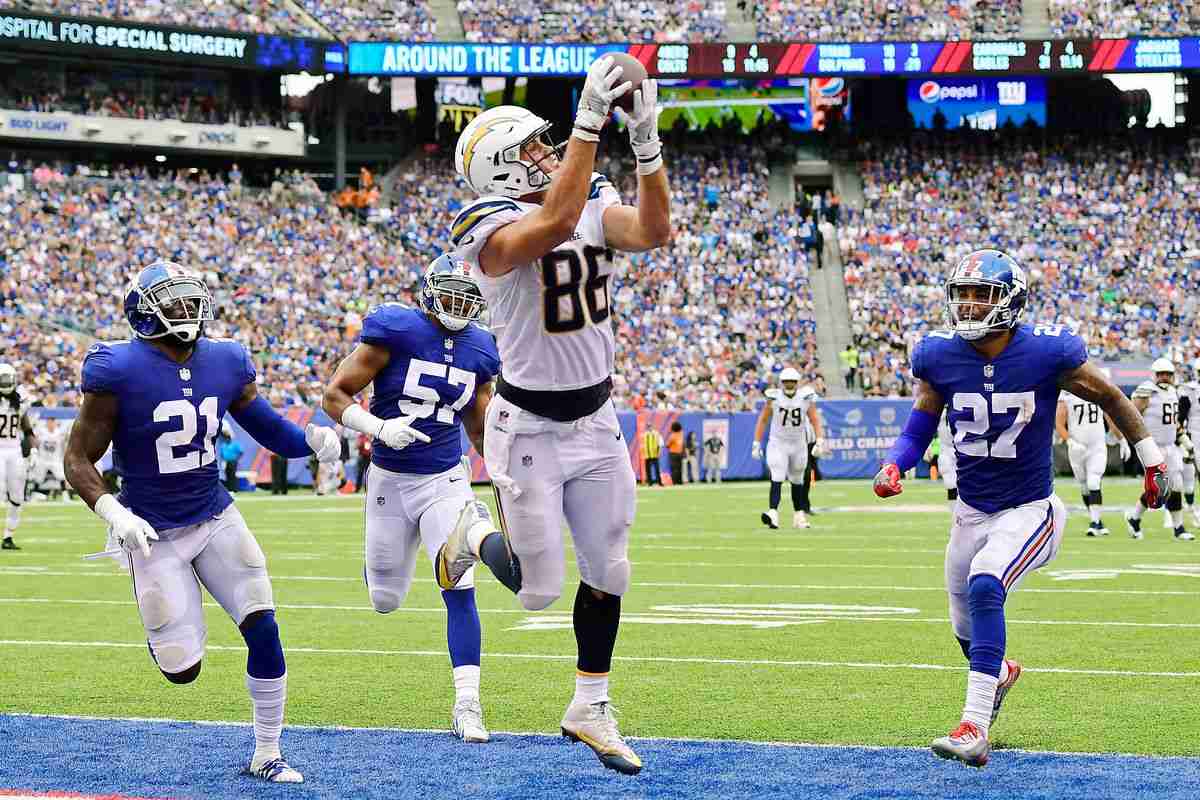 Yes, I am aware that the picture above is not of Virgil Green, but we do not forget our fallen. Hunter Henry was on the verge of becoming the next great tight end in the NFL, sadly he had a full ACL tear in training camp, so he is likely lost for the season.

On a more positive note, the Chargers did sign Virgil Green from the Broncos. There’s a lot to like about Green, his speed (4.54 40 time), his size (6’5″), and blocking ability. He has all the tools to be a great TE in the NFL but seemed to be overshadowed or underutilized by the Broncos. When I say underutilized, I mean it, in his 5 years with the Broncos he only had 720 yards, 63 rec, 4 TDs. In 5 years! Green has great intangibles and with Gates and Henry gone, it’s his position to take. Not sure what to expect, but we all know how the Chargers do with TEs, so it’s safe to assume he will be utilized. 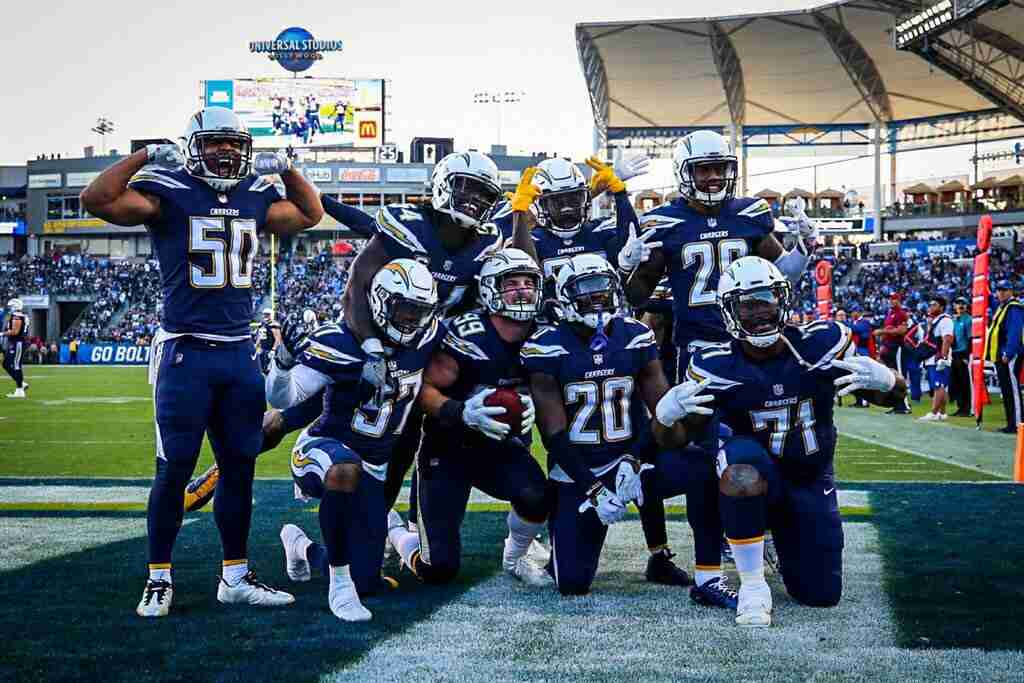 I wasn’t planning on discussing defense for this article, but they are just too good to not cover. Let’s talk about the Chargers defense in 2017, they scored 160 points last year, which made them the 4th best fantasy defense in the NFL. That was without stars like Jason Verrett and Denzel Perryman for most of the season. With the addition of players like Derwin James, Justin Jones, Kyzir White, and the return of the previously mentioned players, the Chargers defense could contend for the best defense in the NFL.

This section isn’t even worth mine or your time, the kicking is the one weak spot on the team. With 3 kickers on the roster, I just want one of them to resemble a real NFL kicker.

I hope you enjoyed my first article, I plan on making plenty more and filling up this Los Angeles Nation Chargers page.

Lance Alworth: A Look at One of the Greatest Chargers’ Players