It appears that restricted free agent Nick Ritchie could be back with the Ducks in the near future. NHL guru Elliotte Friedman reported in his “31 Thoughts” piece that Ritchie has been seen skating in Orange County again, which usually is a sign that talks of a contract extension are coming to a close. We heard earlier this season that Ritchie was skating with the OHL’s Guelph Storm (per @icemancometh), and rumor has it that he has slimmed down and had more focus on skill throughout his workouts. Per Friedman, we are looking at a possible 3 year contract for the physical forward. 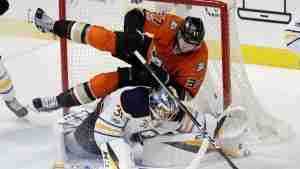 What will the return of Ritchie mean for the Ducks who have been able to hold their own in this young season? Ritchie, last year had 10 goals and 17 assists in his 76 games played. He, like most of the team, did not have any points in the Ducks brief postseason appearance. Ritchie certainly brings a physical presence to the Ducks, sometimes for good and sometimes for bad. As for a physical presence, that is something I feel the Ducks need. With Kevin “Superman Punch” Bieksa no longer with the team, and Josh Manson appearing to take a more leadership like approach with veterans out of the lineup, I do feel that the Ducks could use that big body, in your face physical player. As we saw in Dallas and St. Louis, right now teams are having no problem going to the net and doing some bumping and pushing to our goalies. I think that Nick will be someone who will not shy away from keeping order around the crease. 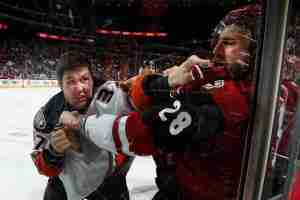 Now, with that being said, we also need Nick to be SMART, and DISCIPLINED about this role. We know that at times he can be a bit of a derailed train out there hitting anything and everything that is not wearing the same color sweater as he is. Coming to mind first could be the boarding penalty he took in the playoff series with Nashville a couple years ago that resulted in the already limping Ducks to be without him because he was sent to the showers very early. I hope that he has learned to be a physical presence while not sucker punching players or almost ending their lives into the boards.

As for scoring, many believed that the Ritchie would be finding the score sheet more than he has. He was consistent over the past 2 seasons with 28 and 27 points in the regular season. For his role, nothing really to be upset at but also nothing to write home about. I feel like the organization is expecting more from him soon though, especially after a contract dispute. The thing with Ritchie is out of nowhere he will come up with a huge goal, and make people forget the stupid penalties he seems to take. He scored the GWG to finally put the game 7 nightmares behind us vs Edmonton, people don’t talk about that enough. He came up big in the very long shootout in Minnesota last February with a 5-hole snapshot. The goal scoring is there, he just needs to find his rhythm.  The problem I am seeing is that with Ritchie apparently back soon, there will be corresponding moves that need to be made. 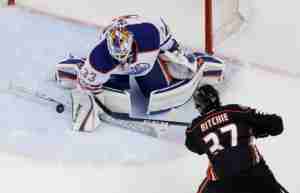 The Ducks 9th game will be Sunday October 21st vs Buffalo (shout out Paul Kariya night) which is the deadline to have eligible players sent back to Junior. One player that I have seen many people saying is a lock to be sent back is Max Comtois. Now with Ritchie coming back, this idea has really caught fire. I for one, do not like it. Comtois has found the score-sheet in almost every game so far, and has been a huge reason for our success. The NHL is a faster, more skilled game than it used to be and players like Max fit in with that system. Players like Ritchie are not the speedy skilled style of play that the NHL is now, but more like the big, in your face, physical style that the Ducks management seems to love. If Comtois is sent back to Junior, so be it… but if the make or break reason is because of Ritchie coming back, I think that is a mistake. 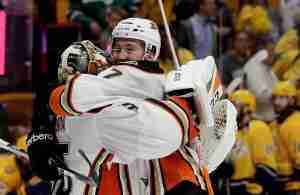