The Anaheim Ducks have accumulated a plethora of exceptional prospects over the last five drafts. However, with every new draft it can become easier and easier to forget the prospects of previous years.

This series of articles will be released in six parts and will offer a little reminder of who the Ducks’ have in their prospect cupboard by examining the Ducks’ top 31 prospects. Each article will provide a list of some of the strengths and weaknesses of each prospect, a player in the NHL with a comparable playing style to each prospect, and the best, worst and most probable prediction for each prospect’s potential.

Weaknesses: Not a great skater, below average puck-moving ability, no discernible offensive abilities.

Matthew Hill is what many would consider the atypical defensemen from the NHL drafts of yesteryear. A tall, steady, stay-at-home defenseman who doesn’t put up that many points. The problem, however, is that the NHL has moved on from those days and has become a league of skill and speed. Players like Matthew Hill are few and far between.

He improves his skating and becomes a serviceable 5/6 defenseman who can kill penalties and clear the front of the net.

He stays a below-average skater and doesn’t improve his puck skills resulting in him languishing in the AHL for the better part of his career.

He will likely improve his skating enough that he can at least keep up in the NHL, however, his lack of puck skills will probably keep him as no more than a 7th defenseman. 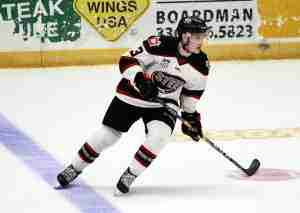 When Badini was selected in 2017, he was coming off a 28 goal season in the USHL for the Chicago Steel. His ability to play a solid two-way game while still putting up goals made him a unique threat on the ice. However, his skill set has not translated as prominently against men in the NCAA. His lack of offensive ability and average puck skills has made it hard for him to put up similar numbers in the NCAA. Through his freshman and sophomore years, he’s put up 37 points through 66 games. His two-way game has flourished as he plays against the opposing team’s toughest competition on his Harvard team; however, his goal-scoring acumen has really dissipated. Because Badini hasn’t shown that he can score against men in the lower levels, it’s hard to see how he’s going to flourish in the NHL.

He improves his puck skills and become a 3rd line checking centerman.

He doesn’t improve his puck skills and doesn’t advance past a middle-six role in the AHL.

He will likely improve his puck skills and skating enough for him to work in the NHL as at least a 4th liner/13th forward.

Will Francis is a very similar player to Matthew Hill. He’s a big, robust and defensive stalwart who does not produce offensively. Francis, however, has a bit more to his game as he’s an average skater who is a step up from Hill who is a below-average skater. Francis’ game has room to improve, but the fact that he’s a big man with decent legs makes him an interesting player to watch moving forward.

If he improves his skating, even more, puck skills, and improves his hockey IQ and vision there is a small chance that he could find himself as a defensive 4/5 defenseman.

He stays an average skater, and his hockey awareness doesn’t improve, he follows in the steps of Jaycob Megna as a career top 4 defensemen in the AHL.

He will likely improve his puck skills and awareness enough that he can compete in the NHL and become a 6/7 defenseman.

Weaknesses: Lacks size and strength against the boards.

Poturalski is an older prospect at 25 and had an incredible season with the Charlotte Checkers as the point leader for the eventual Calder Cup champions. He’s one of the best players in the AHL right now. The question is whether he would be able to translate his AHL domination to the NHL. He has only played two games in the NHL and put up no points, the question about Poturalski’s game is his lack of size. Many scouts don’t believe he will be able to utilize his talents in the NHL because he’s too weak against the boards and doesn’t have the speed to avoid checks.

If he improves his skating and can show that he’s strong enough against the boards, Poturalski could become a 3rd line playmaking center.

Everything stays the same, Poturalski doesn’t get an NHL chance and stays a top 6 forward in the AHL.

He could be a 4th line forward, and this is where he probably is right now. He just needs a chance to play in the NHL. 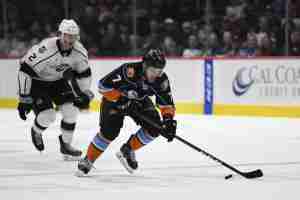 Weaknesses: Lacks size and can struggle competing down low against professional competition.

Similar to Poturalski, De Leo has all of the skills and attributes to play in the NHL and has the counting stats in every league he’s ever played in to support him. However, for some reason, he’s never gotten the chance to utilize his skills in the NHL. Now he’s already 23 and has yet to play a full season in the NHL, at his age it’s unlikely that he’ll improve much more, so the question is whether his current play level is good enough for the NHL. After an excellent 2019 season in San Diego where he got 55 points in 66 games, the 2020 season needs to be the year that De Leo gets a chance to play if he’s ever going to be an NHL player.

He gets a chance to play in the NHL, and his talent translates from the AHL, and he becomes a skilled 3rd line checking forward.

Everything stays the same, and De Leo doesn’t get an NHL chance and stays a top 6 forward in the AHL.

He fills in for injuries in the 2020 season gets some chances to play and become a 4th liner/13th forward.