The Anaheim Ducks have accumulated a plethora of exceptional prospects over the last five drafts. However, with every new draft, it can become easier and easier to forget the prospects of previous years.

This article is the third piece of a six-part series that will offer a little reminder of who the Ducks have in their prospect cupboard by examining the Ducks’ top 31 prospects. Each article will provide a list of some of the strengths and weaknesses of each prospect, a player in the NHL with a comparable playing style to each prospect, and the best, worst and most probable prediction for each prospect’s potential.

If you missed the first 10 prospects covered in this series, check out The Ducks’ Prospect Rankings – 1-31: Part 1 and Part 2. 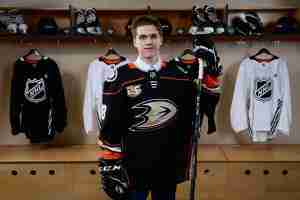 Weaknesses: Doesn’t have a great shot, may not be able to compete the same against men because of his size.

Blake McLaughlin played his freshman year in the University of Minnesota last year and ended the season with 20 points in 35 games. He played the majority of his season on the third line. He was utilized as a checking forward for the better part of the season. McLaughlin has the hockey IQ and skill to contribute in the NHL, but the biggest question is about his size at 6ft and only 160lbs. One has to ask whether his down-low play will be able to translate against men in the NHL. However, if he fills out his frame and improves his shot, his high hockey IQ should allow him to become an effective NHL player.

McLaughlin puts on some weight and gets top-line opportunities in Minnesota. He develops his shot and grit enough to compete in the NHL as a 2nd line playmaker.

He languishes in the middle six on the University of Minnesota roster which stifles his offensive development. He can’t play a big enough game to ultimately contribute in the NHL and is reduced to a skilled 4th line role.

He moves up the lineup on his University of Minnesota team, and with increased time his shot and offensive skills improve even more. His size limits him, but his talent and IQ allow him to contribute as a successful 3rd line playmaker. 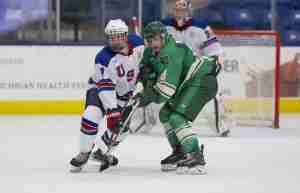 Weaknesses: May not be able to translate his ability to retrieve pucks to the NHL because of his lack of size.

Trevor Janicke played in the USHL last year for the Flying Aces as the captain of the team. He led his team in points with 48 points in 58 games. Janicke has a really good shot and sees the ice well. Janicke is proficient at retrieving the puck down low and getting it to the center of the ice. The problem he might have coming up to the NHL is retrieving the puck with the proficiency that he does in the USHL. His time in the NCAA should show whether he can dominate the older competition. If he can contribute offensively for his University of Notre Dame team to a similar level of his USHL campaign, it could mean that the Ducks got a steal in the 5th round akin to their Troy Terry and Ondrej Kase selections.

Janicke dominates in the NCAA with more skilled players around him. He overcomes the size difference many scouts are worried about. He improves his already strong shot and hockey sense and turns into a 2nd line forward that plays similar to Ondrej Kase.

He can’t get his footing in the NCAA and struggles to push the play offensively. Subsequently, his play type doesn’t translate well to the NHL because of his small frame, and he is relegated to a skilled 4th liner position trying to feast on the weaker competition.

His NCAA campaign mimics his USHL campaign, and he becomes a strong offensive college player. The size difference probably won’t be a massive issue for Janicke; however, it may limit him from getting to the level of Kase. It is likely that instead, we’ll see Janicke become a 3rd line scorer with limited 2nd line time. 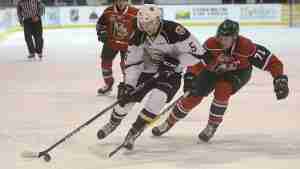 Weaknesses: Not the fastest skater.

Hunter Drew had a big year last year with the Charlottetown Islanders. Drew put up 50 points in 60 games last year as a two-way defenseman. He showed considerable improvement from the 2018 season and benefitted from the increased ice time he received. Drew sees the game like a professional and can make seam passes and protect the front of the net. The area where he is weak is skating, which is not an asset, it’s not a huge detriment, but it could give him issues in the NHL.

Drew showed off his superb hockey sense and offensive skill in the Ducks’ Rookie Faceoff Tournament. The tournament pitted the Ducks’ prospects against the Kings’, Golden Knights’ and Sharks’ prospects. Drew ended up being one of the best defensemen in the tournament, he made good transition plays, good pinches, kept tight gaps on forecheckers and displayed the offensive abilities that got him 50 points in the QMJHL in 2019.

He gets a chance as a top-pairing defenseman on the Gulls right away and develops his speed a bit more. His hockey IQ and defensive abilities translate into the NHL, turning him into a 3/4 defenseman as a defensive stalwart.

He only gets 3rd pairing duties in the AHL and doesn’t get many offensive chances. His speed ends up being a deterrent for him in the NHL, and he contributes as a 7th defenseman in the same vein as Korbinian Holzer. 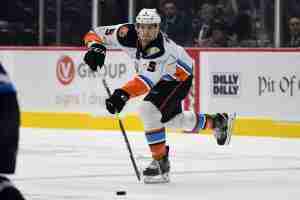 Weaknesses: Not the greatest offensively.

Benoit came onto the scene out of nowhere. He was signed at the beginning of the 2019 season and quickly became a vital defenseman for the San Diego Gulls. He doesn’t contribute offensively that much, but he is a smooth skater and is proficient at breaking up the play in his own zone. With so many defensive prospects that play the left side for the Ducks, i.e. Mahura, Larsson, Guhle, LaCombe, along with roster players Lindholm and Fowler, it could be difficult for Benoit to break into the NHL for the Ducks. As a result, Benoit needs a very strong showing this year in the AHL and possibly even push for a roster spot as soon as 2021 if he wants to make the Ducks’ roster.

His offense improves with more ice time, and he develops into a two-way defender as a 4/5 defenseman.

His defense makes up for his offensive detriments, and he becomes a solid two-way 5/6 defenseman. 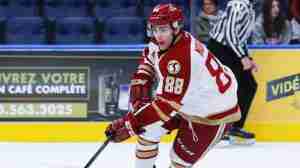 Weaknesses: Is inconsistent offensively for his skill level.

Morand has all of the tools needed to be a star scorer in juniors, but somehow he doesn’t post substantial counting stats. You watch him on the ice, and you can see that he’s in control whenever he’s on the puck, but somehow his ability to control play doesn’t translate into points. He can get under the skin of his competition and plays a grittier game than what you’d expect from such a small player. Morand is a tough one to predict because you can see he does everything right on the ice that should translate to the NHL, but something isn’t right most nights which leads to him having average seasons for his age and pedigree in the QMJHL.

The Gulls coaching staff can figure out the reason for his offensive consistency, and he starts putting up points and develops into an elite 3rd line center.

His offensive consistency doesn’t get figured out. He has to find minutes in the NHL as a winger on the 4th line.

His all-around skill makes up for a bit of his offensive inconsistency. He fills a roster spot as a two-way bottom 6 winger.