Saturday, January 28th, 2023
THE LATEST
Home Ducks John Gibson is the Best Goalie in the NHL

Many hockey fans at least know that John Gibson is a good goalie, but most don’t know just how good he really is.

John Gibson has been the full-time starting goalie of the Anaheim Ducks for three years now. Before being the full-time starter, he was in a tag-team role with Frederik Andersen as a starter B goalie for the 2015 and 2016 seasons. Through 241 games played Gibson has posted a record of 121-79-28 with a .922 SV% and 18 shutouts. Those are respectable stats on their own, but they don’t begin to show how good Gibson has been since joining the league.

By the end of the article, you will see why John Gibson isn’t just an elite goalie; he’s the best goalie in the league and has been for a couple of years.

Before expounding on stats that show why Gibson is the best goalie in the league, it is essential to clarify what each stat is and why it is useful. 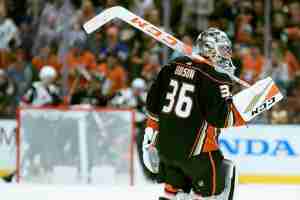 What Do Stats Even Mean?

The first, most important and most misused stat used in this analysis is Corsica’s Goals Saved Above Average (GSAA). The reason why it’s important to qualify it as “Corsica’s GSAA” is because other stat sites like hockey-reference.com use GSAA as well; however, their stat means something completely different from Corsica’s.

The version of GSAA hockey-reference uses takes the SV% of the goalie and shots faced and contrasts that to the league’s average SV% in the same amount of shots faced, it doesn’t adjust for shot quality. Corsica’s GSAA adjusts for shot quality and is most similar to Evolving-Hockey’s stat; Goals Saved Above expected (GSAx).

Corsica’s GSAA and Evolving-Hockey’s GSAx both measure how many goals a goalie saves above the expectation based on shot quality faced. For example, if a goalie has a 3.0 GSAA, that means that they have saved 3.0 goals more than what an average goalie would be expected to save facing the same shots. Unlike a blanket stat like SV%, Corsica’s GSAA offers a picture of how good a goalie is at making saves despite porous defensive coverage.

The second stat this article will be using is Delta Save Percentage (dSV%). Delta Save Percentage takes the goalie’s SV% and subtracts their expected SV% (xSV%). The beauty of dSV% is that it gives a picture of how much that goalie’s SV% is actually worth because a starting goalie who has a high SV% but a low dSV% isn’t making as many difficult saves as a starting goalie with a high dSV% and a lower SV%. Looking at you Vasilevsky.

The third stat this article will be using, which has been mentioned already is Expected Save % (xSV%). Expected Save % takes the quality and quantity of shots a goalie has faced and provides what kind of SV% an average goalie should have, given the shot quality they face. For example, if a goalie is facing shots from below the dots all the time they will likely have a low xSV%, while a goalie who faces shot mostly from outside the dots will often have a higher xSV%.

Gibson is a Goalie God

Now that you know what each stat means it’s time to look at what they say about Gibson. In the past three seasons and up to the present, Gibson has really dominated the net and should have at least one Vezina. Through three seasons of play and 174 games, Gibson has posted an 85.31 GSAA and 1.62 dSV%, the highest total in both categories. 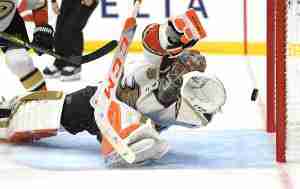 The difference between Gibson and Bobrovsky and the rest of the pack is stunning.

The order of dSV% in the league from 2017-to present isn’t much different from the order of GSAA leaders for those three seasons. Out of goalies with more than 130 games played the order for dSV% is Gibson at 1.62, Bobrovsky at 1.29, Fleury at 0.7, Andersen at 0.62, Rinne at 0.49, Bishop at 0.41 and Talbot at 0.34. Again you can see that Bobrovsky and Gibson are both a clear step above the rest of the pack.

Given the significant success of both Gibson and Bobrovsky over the last several years, there was an argument to be made that Bobrovsky may be better than Gibson. However, after the 2019 season, that argument can clearly no longer be made. In 2019 Gibson once again topped the league in GSAA with 28.63, four above the next highest and Vezina trophy winner Ben Bishop who had a 24.66 GSAA. Bobrovsky was much further down the list of goalies in 25th place with 4 GSAA. Whether it be a random down year for Bobrovsky or his age catching up with him, he had a fairly poor season relative to his standards in 2019. Bobrovsky’s struggles have continued into the beginning of the 2020 season as he has posted a -5.33 GSAA and a -4.85 dSV% through five games. It’s a small sample size for sure, and Bobrovsky should bounce back to being an elite goalie in the league this season, however, considering how razor-thin the separation between Gibson and Bobrovsky has been since 2017 it’s safe to say Gibson has cemented his position as the #1 goalie in the league.

Bobrovsky’s poor performance in 2019 and the beginning of 2020 combined with Gibson’s consistent Vezina-worthy performances negates any argument saying Gibson is still #2 to Bobrovsky’s #1 status. 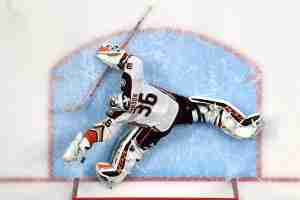 Gibson Vs. The Top Goalies This Decade

Considering how successful Gibson has been over the last few years it should be interesting to look at where he sits against star goalies from the last decade.  How does his performance in 2018 compare to Price’s mammoth performance in 2015? How well does he stack up against other goalies over a 10-year span? Take a look.

How does Gibson stack up against the past decade of goalies? Below is a table showing the stats for the top 10 goalies with the highest GSAAs and dSV% since 2008.

First observation, after viewing the top 10 goalies over the last decade, wow Lundqvist really was “The King.” The second observation, Halak, was a much better goalie than he was given credit for in the last decade. Third observation, how is Carey Price so low? The final observation, Gibson is 3rd in GSAA with the fewest games. Gibson also has the highest GSAA/GP in the group and the highest dSV%, which essentially means he has saved the most expected goals per game against the most dangerous shots. All of this isn’t to say that Gibson is the best goalie of the decade; however, if he keeps up the pace he’s playing at he’ll be one of if not the best goalie of his decade and the previous one.

What Do Gibson’s Stats Say about the Ducks’ Past and Future?

The most obvious observation you can make from Gibson’s stats is that the Ducks’ defensive structure was very bad over the past three years. Despite having very talented defensemen in Lindholm, Fowler, Manson, Vatanen, Theodore, and Montour over those three years, the Ducks were awful defensively. They were a defensive powerhouse for the 2014-2016 season, with one Jennings trophy win for the least goals scored in the 2016 season. The significant change for 2017 was the hiring of old coach Randy Carlyle.

However, if Ducks fans remember correctly, up till about December, there was a semblance of hope that the Ducks could make the playoffs because they were still winning games somehow. 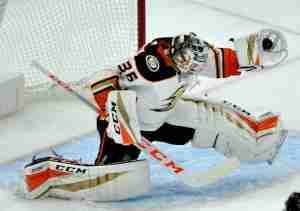 The reason for those wins was John Gibson who was playing out of his mind for the first half of the season up until January 13, 2019. Before the Ducks’ game against the Winnipeg Jets on January 13, 2019, Gibson had already accumulated 27.32 GSAx; meaning he had to make up for 27 goals that the Ducks weren’t scoring against the other teams.

After January 13, 2019, Gibson’s play dropped off, and we found out at the end of the season that a big part of that drop off was due to an excessive workload. Bob Murray commented on Gibson workload over the first half of the 2019 season,

So, with Randy Carlyle and his system and a new modern system coming in, what does that mean for Gibson and the Ducks’ future? Well, one thing is for certain, John Gibson will put up another stellar season and this year he could have, at the very least, an average defensive system in front of him. With a league average system in front of him, Gibson could finally have a team in front of him that could lighten his workload and push him into the Vezina conversation for GMs who only look at wins.

For the Ducks, having even a league-average defensive system could cause them to shoot up the standings from their 80-point performance in 2019. With average defense and another otherworldly performance from John Gibson, the Ducks could see themselves fighting for the playoffs in the 2020 season.

No goalie can change the fortunes for a team more than John Gibson, and with a little support in 2020 the Ducks retool could be wrapped up after only one year.