The 2020-21 NHL season for the Los Angeles Kings is almost over. There is a glimmer of hope for a playoff spot but those chances are slim. As they finish the season we ask ourselves which young gun do we see next?

With Quinton Byfield making his NHL debut last week that left the Kings with one call-up left to use. This begs the question if you use that spot on a forward, defensemen or even use it at all? The Seattle Kraken expansion draft could play a big part in who they use that call-up on. Teams need to reserve players that are exempt from that expansion draft and the organization may need to call up a top-tier prospect to avoid being unprotected.

The options could include forwards Alex Turcotte, Akil Thomas, and defensemen Sean Durzi and Cole Hults. Turcotte has been decent this year, posting 15 points in 28 games, along with 20 penalty minutes with the Ontario Reign of the AHL. Thomas has also been good, recording 8 goals and 12 assists for 20 points in 35 games. These two could help bolster a forward group that lacks youth and determination. 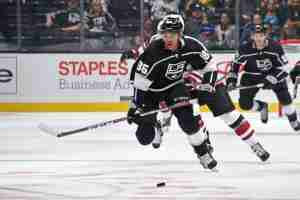 On the blue line, Sean Durzi and Cole Hults could be callups if the Kings decide to go defensive. Durzi, the more offensive of the two, averages half a point per game, posting 15 points in 34 games. He could be brought in to help the second power-play unit. Holts is more defensive and relies on positioning and cutting down space in the defensive zone. Holts has 1 goal and 4 assist for 5 points in 19 games.

Would you use that call-up option and who would you choose? Time is running out with only 6 games left so we will find out sooner than later.