The Los Angeles Kings continue to be busy but this time instead of signing a key player they make an important trade, landing one of the two top 6 forwards they were hoping for. Welcome to Los Angeles Viktor Arvidsson.

The Kings acquired Arvidsson from the Nashville Predators for the Kings 2021 2nd round pick, along with the Kings 2022 3rd round pick. The Kings were not only searching for offensive help but a couple of top 6 forwards. They got one of them out of the way and will look for another via trade or free agency. They get Arvidsson, who will help boost an offense that needed help last season. He will likely fit on the second line to begin the season.

Arvidsson, who can play either wing position, is a smaller player at 5-foot-9 and 181 pounds. He makes up for his lack of size by offensive creativity, scoring goals, and getting in the dirty areas. He has great speed, very creative with the puck, his work ethic is off the charts, and has a knack for scoring important goals. 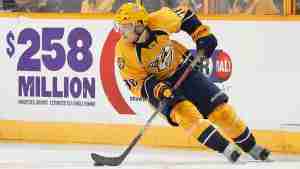 Arvidsson is about offense and creating space for his teammates but he is defensively responsible and will take care of the neutral and defensive zones. Although he has been somewhat injured more than most the past few seasons, he has contributed offensively when healthy.

The Kings continue to build a strong contender this off-season. With the expansion draft, NHL Entry Draft, and free agency General Manager Rob Blake is not done fine-tuning this team. The next month should be interesting. Who would you like to see the Kings pick up in free agency?