The Los Angeles Kings have been very busy over the past 10 days. Re-signing, signing, and trading to make this organization the most complete in the league. Let’s see what they did.

The big move early was acquiring forward Viktor Arvidsson from the Nashville Predators. This move gives Los Angles a legitimate scoring threat and a top 6 forward.

They re-signed Trevor Moore (2 years/$3.75m), Andreas Athanasiou (1 year/ $2.7m), and Lias Anderson. These moves give the Kings the ability to move players around in the lineup. Moore and Athanasiou will be in Los Angeles, while Anderson may be with the Ontario Reign.

They also made some sneaky moves in free agency to bolster their already loaded lineup in Los Angeles but also made some moves to strengthen an already impressive Ontario Reign team.

They signed center Phillip Danault in free agency (6 years/ $33m). Danault had 24 points (5 -19) in 53 games but also established himself as one of the game’s best two-way players.

Defenseman Alex Edler was signed in free agency (1 year/ $3.5m) to give the Kings a left-handed defenseman with experience. The 6-foot-4 and 212-pound blueliner had 8 assists in 52 games with the Vancouver Canucks.

Finally, the Kings made a trade with the Arizona Coyotes. They sent defenseman Cole Hults and forward Boko Imama to the Coyotes for forwards Tyler Steenbergen and Brayden Burke, in which Burke signed a 1-year contract extension.  Steenbergen will be in Ontario but Burke could be with the Kings as a 3rd line center. 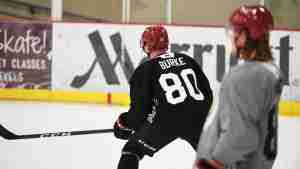 Busy week and they may not be done. What was your favorite move by the Kings? The Kings are primed and ready to make a serious playoff run.