Kings defenseman Sean Durzi is an elite young gun for the Los Angeles KingsHe has come so far in his young career and making quite the impression on the organization. He is looking like a serious contender for a letter when he arrives in Los Angeles.

During this off-season,  Durzi spent time working on getting more zip and elevation on his shot. He also spent time in the gym, gaining muscle to help in the defensive zone while battling in the corners and in front of the net. He has worked hard this off-season to be a more complete defenseman. 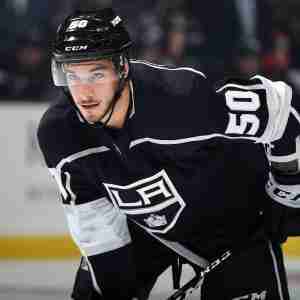 Durzi is an all-around defenseman who has a lot of the same qualities as current King Drew Doughty. Same position, same handiness, both offensive and defensively responsible, both leaders, both have an incredible work ethic, both lead by example in the defensive zone and both are vocal.

Durzi is still young and early in his career. However, much can be said for his abilities off the ice. Durzi has all of the tools to be successful and is showing signs of handling pressure and leading a defensive core at his young age. Durzi is shaping up to be the next leader on the blueline of the Kings. He has a high upside and has taken the ball and ran with it. Look for Durzi to be with Los Angeles sooner than later as he continues to be the best overall young defenseman in the Kings organization.