The 2021-22 NHL season got off to a bang for the Los Angeles Kings, winning 6-2 on opening night against the Vegas Golden Knights. After losing their next 2 contests against the Minnesota Wild and Nashville Predators things still look good but why?

The Kings have looked vastly different this season, even though they’ve only played 3 games. What is different? Well to be honest pretty much everything.

The Kings brought in some new, veteran talent. So far those are paying off in a good way. Phillip Danault has taken the pressure off of NHL leading scorer and captain Anze Kopitar, while Viktor Arvidsson already has his first goal as a member of the Kings. 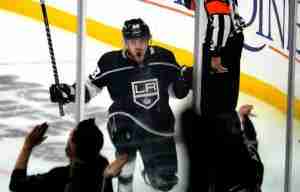 With that being said the team as a whole looks different. The pairing of Drew Doughty and Mikey Anderson looks like a legit NHL pairing. The powerplay is clicking, with the shot selection and passing looking crisp. The defense is not making the same mistakes they did last year. The team looks to have more energy and more intense puck pursuit in all 3 zones.

The lines are also clicking. Not one line looks lost or out of place. The lineup plays as a team and every line is creating chances, has speed and youth throughout the lineup.

With that being said yeas we are less than a week into the new season and things could change. However, what if it doesn’t? What if this version of the Kings plays this well and is once again in playoff form? From what I have seen they are ready to be a contender again. This team is clicking already and looks dangerous.

My expectations are a ticket to the playoffs. The Kings are well-balanced and look hungry but what do we contribute the difference in play too? A few of last year’s results and everyone buying in.