The 2021-22 NHL season is just beginning for the Los Angeles Kings and already the team is facing adversity. The roster from opening night is no longer due to some key injuries.

Defenseman Drew Doughty left the game against the Dallas Stars after a knee-on-knee collision just over the blueline while entering the offensive zone. He was taken out of the game and has not played since.

Defenseman Sean Walker left the game against the St. Louis Blues the other night after getting tangled up after a faceoff in the defensive end of the Kings. He too left and did not return and it looks as if he may be out an extended amount of time. 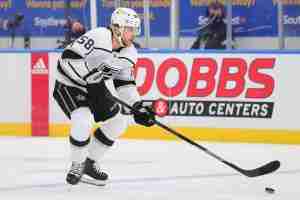 If these injuries with Doughty and Walker are severe Strand and Clague could fill those holes. However, they will not be able to fill the offensive void those two bring so a move may need to be made for offensive help.

Both injuries are unfortunate and maybe could have been avoided by the opposition. Doughty and Walker are both to be evaluated when the Kings return to Los Angeles to begin a 5 game homestand.

These injuries put another damper on the current season. The Kings are currently on a losing streak and have one win on the season so far.

Let us hope that the injuries are not serious and both Doughty and Walker make full recoveries. They are important to the King’s success and possible playoff push.