Saturday, November 26th, 2022
THE LATEST
Home Kings Has The Kings Phillips Run Out of Time?

The 6-foot-0 and the 207-pound defenseman has played really well since joining the Kings organization. Not flashy or a big point producer he does have the intangibles to be a good defenseman by playing a simple, yet effective, game.

Drafted by the Kings 118th overall in the 4th round of the 2017 NHL Entry Draft, Phillips has contributed at both ends of the ice. However, Phillips has yet to play a single NHL game and has been with the AHL Ontario Reign the past few seasons.

Or does he make it with Los Angeles? With his potential and being a player who can compete in all 3 zones, he might be an attractive piece to a team willing to give a draft pick in return for his services.

Does he still have potential with the Kings? or has he worn out his welcome in Los Angeles? 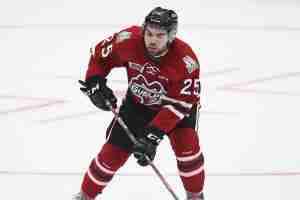 During his OHL days, he won an OHL championship with the Guelph Storm in the 2018-19 season. Phillips also set a career-high in points with Owen Sound of the OHL, recording 13 goals and 30 assists for 43 points in 66 games during the 2016-17 season.

Although defense is his primary attribute, he can join the rush if needed. He has tremendous speed, the ability to close gaps in the defensive zone, and is competitive in all 3 zones.

Why he has not received a trial in the NHL is beyond me but I trust the brass in Los Angeles. He is a very solid defenseman who could be a top 4 defenseman with the Kings or be a trade piece for a bigger deal.