The Los Angeles Kings have the top prospect pool in the league. One of those prospects is making noise in a big way.

Defenseman Kale Clague is getting an opportunity with the Kings and he is making the most of it. Although on a part-time basis right now, Clague is making a serious case for a full-time position.

With the injuries to Drew Doughty and Sean Walker, the team discussed that the roles would be filled from within. Players in the organization had to step up and Clague has done just that.

Drafted 51st overall in the 2nd round of the 2016 NHL Entry Draft, Clague had to wait a bit for an opportunity. A smaller defenseman he comes with all of the raw tools to make a name for himself as one of the better young blueliners in the league.

One of his best attributes is his speed. While the ability to join the rush is there, that speed also helps break up odd-man rushes and chances from the opposition. 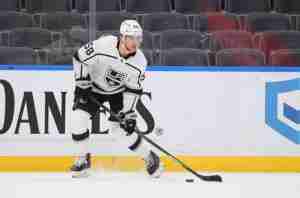 Clague has the drive to play on any defensive pairing, as well on any special teams unit. While he does not bring a laser slap shot, his shots do get through for tips, rebounds, and scoring chances.

After draft day, Clague went back to play in the WHL for a couple of seasons before turning pro with the AHL Ontario Reign. Since arriving in Ontario, Clague has put his name on the map as an up-and-comer in the organization.

Although he has yet to score his first NHL goal, he has shown offensive flashes. He has shown the ability to create in the offensive zone, leading to 11 assists in 30 career NHL games.

Clague is clearly a star in the making. He is also ready to be a King full-time and the only question is when does that full-time opportunity come?