A 3rd round pick (72nd overall) in the 2005 NHL Entry Draft, Quick finally knew he had a chance to make a name for himself. He did that in more ways than one, scoring a goal during the 2007-08 season with the ECHL Reading Royals.

He has quite the rap sheet for success. 2011-12 won the Stanley Cup, Conn Smythe trophy, as well as being named to his first NHL All-Star game while posting his career-best with a 1.95  GAA.

Quick is a butterfly goalie with amazing reflexes. However, the last 3 seasons have not been that kind to Quick, posting a career-high GAA and a backup type save %.

People. including myself, wondered if his best days were behind him. He had been a legend in between the pipes and has played unreal hockey.

This season has been quite the reversal. Quick has found his game again and is playing unbelievable hockey. 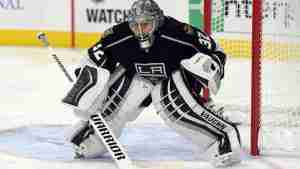 He currently has a 1.88 GAA has been keeping the Kings in games. Was the thought of goaltending teammate Cal Petersen taking over the goaltending duties enough to get Quick back on track?

Regardless of why he is playing at an elite level. Quick is playing like the old Quick, which means the Kings can count on him stealing games regularly.

Quick can be an elite goaltender once again and lead the Kings to the playoffs based on the way he has played. On a nightly basis, he gives the team a chance to win due to his unusual playing style.

If Cal Petersen can regroup and play like Quick is now then the Kings have one of the best goalie tandems in the league. Do not count out these Kings with these two between the pipes.