The much-anticipated return of Los Angeles Kings center Quinton Byfield has come and he is back on the ice. Currently playing for the AHL Ontario Reign, his return to the Kings could be right around the corner.

The 6-foot-4 and 216-pound center was the first-round pick (2nd overall)of the Kings in the 2020 NHL Entry Draft. He was out of action with a left ankle fracture.

Blessed with explosive speed and offensive creativity for a man his size, his return spells a couple of things. He was determined to get back to playing the game he loves and the Kings are not far from calling up the impact player they need.

After dominating the OHL, Byfield made his pro debut during the  2020-21 season with the Reign, playing in 32 games and registering 8 goals and 12 assists for 20 points, along with 24 penalty minutes. He made his NHL debut the same season, getting one assist in 6 games.

Although he only had one point with the Kings, Byfield did not look out of place. He created chances, played a physical game, and did not cost his team in any zone. 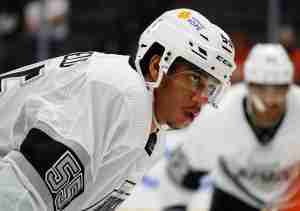 Since being activated off of injured reserve he immediately was assigned to Ontario.  This move was good for his development, getting his timing back and speed was key.

Byfield in a way has to prove himself again. Coming back from an injury like that is not easy. He already has a lot of pressure being the second pick in the NHL Entry Draft.

Byfield is the face of the franchise and the NHL. Once he gets adapted to the game and has a full-time role he will dominate just like he did in the OHL.

A couple of weeks in Ontario should be about the time he may be called up to Los Angeles. What would your timetable be for his return to the Kings lineup?