Every NHL team suffers injuries, goes through call-ups, and deals with adversity. The defense of the Los Angeles Kings went through some key injuries and is still fighting adversity.

Drew Doughty missed some time and both Sean Walker and Alex Edler are done for the season. This put the King’s defense on notice to perform above expectations.

Since the start of the season, the King’s defense has been criticized for not competing hard enough, not trading Olli Maatta, and giving up easy goals.

The defense, to date, has exceeded the offense as the thing keeping the Kings in games. The defense has performed extremely well considering the circumstances.

The group of Maatta, Sean Durzi, Mikey Anderson, Tobias Bjornfot, Matt Roy, and Christian Wolanin may not be household names but they are playing like all-stars. This group deserves a round of applause for the job they’ve done with, arguably, their top 3 defensemen out of action. 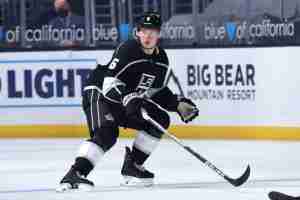 Durzi and Maatta have been the highlights so fara. Maatta has really turned things around since the start of the season and Durzi looks like a legit NHL defenseman.

The Kings sit 10th with 79 goals against, 8th with a 2.56 GAA, and 13th with an average of 30.8 shots against. This group is not perfect but they’ve all realized what they need to do to keep the Kings in contention for a playoff spot.

The only thing this core need is seasoning and timing to be an elite group. They are coming together and playing like veterans, which is unheard of with a group this young.

Time will tell if they stick together. If they do this core could be the group of defensemen for Los Angeles the next 10 years.

This group will get better as time goes on. As a group, they have stepped up and replaced some of the best defensemen in the game.

Some of these defensemen deserve letters and bigger roles next season. Stick taps to this group as they have been outstanding.