The Los Angeles Kings had all the important questions of who was going to be their starter in net going into this season. That question wasn’t answered quickly but the Kings have their answer now.

Cal Petersen, the 6-foot-1 and 183 pounder was the goalie of the future when Jonathan Quick was either traded or retired. That time seems to have passed for now as Petersen will be the backup for the foreseeable future.

The 5th round pick (129th overall) in the 2013 NHL Entry Draft by the Buffalo Sabres still has promise but has the starter role passed him by? His stats overall in the NHL say maybe they have. 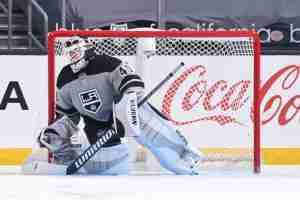 Although Petersen signed a 3-year extension worth $15 million on September 22, 2021, he hasn’t shown he is near the top of the league in any category. If Petersenwants the starter’s job, in Los Angeles or elsewhere, he needs to be more consistent and raise his game to another level.

Cal Petersen can still be an elite goaltender because he has shown flashes of greatness and he is still young. He is going to have to come into next year and not only take the job away from Quick but be one of the best goalies in the league to earn that right.