Alex Turcotte, one of the most talked-about prospects for the Los Angeles Kings, finally took that skate alone and had people talking. He made his debut without a point, just the debut gave fans hope for the future.

Turcotte was drafted in the first round (5th overall) in the 2019 NHL Entry Draft. After much anticipation, he made his NHL debut on December 28, 2021, against the Vegas Golden Knights.

There were jitters and anxiety but he was confident in his abilities once he hit the ice. He has played 3 NHL games so far and, while being held scoreless, has not looked out of place and has shown flashes of why his debut was so anticipated.

Turcotte is only 5-foot-11 and 185 pounds but he makes up for that by using his speed to create offense for his teammates and to get away from the opposition. 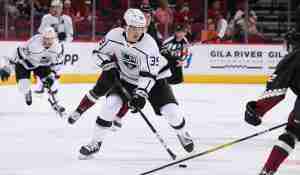 Turcotte is very solid in all 3 zones and does not shy away from the scrums that take place. He is known for his offense but do take notes of the other skills he possesses.

Turcotte is equipped with incredible hockey sense, is a gifted playmaker, and is a blessed 2-way center. He and fellow center, Quinton Byfield, are the two prospects to keep an eye on as they lead the Kings over the next 20 years.

Turcotte has the ability also dramatically change the way the game is played. His speed allows him to skate the entire sheet of ice in seconds while he can also hold the puck along the boards and play the board battle.

Turcotte will be on the Kings’ radar until he is a full-time player. With his skills and work ethic, he could be a star in this league for a long time.