Los Angles Kings prospect, defenseman Brandt Clarke, is doing everything in his power to make the 2022-2023 Kings roster out of training camp.

Clarke began to wow management in developmental camp and then through the rookie tournament. He has shown poise and the ability to take over a game. Clarke is a rookie but looks more like a veteran on the ice. Kings management has a big task at hand when it comes time to decide what to do with Clarke when training camp is over. The only options are with the Kings or back in the OHL with the Barrie Colts. He is not yet eligible to play with the AHL Ontario Reign.

Clarke is working hard, showcasing his skills, and looking like he belongs.  He is not making mistakes, showing he can jump into the play when necessary, and playing well in his own zone. He does not lack any tools that would require him to spend more time in the OHL. Yet, the right side of the defense for the Kings is loaded. So what do they do? 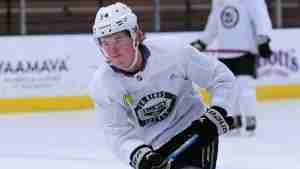 The right side consists of Drew Doughty, Sean Walker, Jordan Spence, Matt Roy, and Sean Durzi. If one would move to the left side there is still no room on the Kings roster. Unless there is a trade then Clarke would be sent down.

However, there is a scenario where  Clarke leaves them no choice but to make a trade. He is making it hard for them to keep him off the roster. With his potential, he will make an impact when he does arrive in Los Angeles. The question remains is he here to stay now?

Would it hurt to send him back to Barrie? No, however, his confidence could be shaken, and at the OHL level, he has nothing left to prove. If he stays with the Kings then who goes? Matt Roy? Sean Walker? Sooner or later the Kings have to make room for him. He provides so much to the team, like his skating, offensive capabilities, and power play time management.

The question will be answered within the next two weeks as camp winds down. Should he stay up? That is the big question. Signs point to him playing his way on. However, we are not general manager Rob Blake. He might have a different opinion, one reasoning we might not have thought of.