The Los Angeles Kings are coming up quickly on the 2022-2023 season. While still in training camp, players are being released, sent to their junior teams, or to the AHL Ontario Reign. Some moves happened yesterday, October 5th, to trim down the roster. There are now 34 players left in training camp, with 12 more cuts to trim the roster down to a league-approved 22. 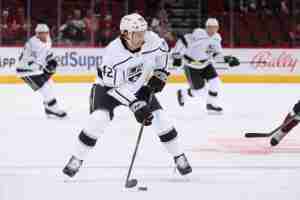 Training camp is nearing the end with questions still needing to be answered. Does defenseman Brandt Clarke earn a spot on the roster? Who makes the cut for the bottom six forward positions? There are battles still to be had in training camp to earn those last few spots.

The top half of the forwards look to be set with only a few spots open. The defense is anyone’s guess and the goaltending spots look to be filled with Jonathan Quick and Cal Petersen. A prospect could be sent down but grab the attention of management in case of a call-up. The Reign now has several players who could earn that opportunity this season and make their opportunity count.

With the season a week away those remaining cuts will be made soon and the final rosters will be made public next week. Those who make it will have earned it and those who did not may still get a call-up. The Kings roster is starting to take shape, with a hungry group ready to take the ice. Is this the year they get it done? This roster is full of promise and looks to be dangerous as well. It is almost time for the start of the 2022-2023 season and the Kings look to make some noise early and often.