The Los Angeles Kings 2022-2023 season is here and it is filled with high expectations. With the offseason acquisition of high-scoring forward Kevin Fiala, the Kings think they have what it takes to make a trip back to the Stanley Cup finals.

The Kings have announced their roster for the new season, highlighted by a highly regarded prospect ready to make his NHL debut. The rest of the roster should leave no surprise, as it may be what one would expect. Here are your 2022-2023 Los Angeles Kings: 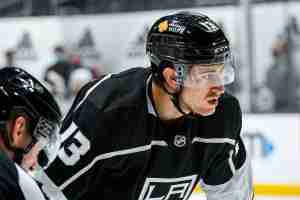 The highlight of this roster is defenseman Brandt Clarke, making the team after a very impressive training camp. A lot of pressure on his shoulders but he has passed every test so far that has been put in front of him. There is no definitive answer on who he will be paired with or how many minutes he will get but his time is now.

A question, based on how the roster was constructed, is who will play the left side on the defense? Of the team’s seven defensemen, five of them shoot right. This may be something to watch as the chosen defenseman will have his work cut out for him. Another thing to watch as the season opens is goaltender Cal Petersen. Can he rebound from a difficult second half of the 2021-2022 season and training camp? Can he rebound to make this a goaltending duo worth putting fear into the competition? This is a big year for Petersen to bring his game back. The forward group looks solid and Gabe Vilardi looks to continue his hot play after a terrific training camp. His versatility could come into play down the stretch.

What do you think of the King’s roster as the season gets started? Do you agree with the roster? If not, who would you replace? This season is aiming to be a fun one so buckle your seatbelts, it could be a crazy ride.