Iafallo was injured in the King’s 5-4 overtime win against the Detroit Red Wings on Monday night. Iafallo made contact with a Red Wings player in the King’s offensive zone as the puck was being taken the other way. Iafallo skated slowly to the bench with little to no weight on his left leg. He has two goals and three assists for five points this season, playing on a line with Quinton Byfield and Gabe Vilardi. 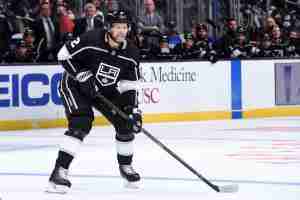 Edler was also injured in the contest against Detroit, but this injury came before the puck drop. During warmups, Edler took a shot and was turning to head towards the blue line. As he turned, the puck flew off of the goalpost and hit him in the face. Teammates led him to the bench where he was attended to by medical staff.

While there is no clear answer to how severe the injuries are, the Kings recalled defenseman Jacob Moverare from the AHL Ontario Reign. He was in the lineup against the Nashville Predators, which the Kings won 4-3 in a shootout. This move will give the Kings six solid defensemen as they wait to see how long the veteran Edler will be out. Edler has not registered a point this season. Edler was one of the more experienced defensemen in the lineup, bringing close to 1,000 NHL games and 17 years to the Kings.

Los Angeles has enough depth where these players can be replaced by position only. As mentioned, Moverare has been recalled to help the defense. Do the Kings recall a forward too or do they fix that situation in-house? Two names that could be recalled are Martin Chromiak and Samuel Fagemo. Both played excellently in the preseason and could get the call if the Kings go that route.