NHL franchises are successful based on draft picks, free agents, and through trades. With every good trade, three bad trades that send the franchise back.  With the Los Angeles Kings, they have made their share of remarkable trades, including bringing in forward Jeff Carter, which resulted in Stanley Cups. However, the organization has made trades that make one wonder what they were thinking. Here are the top five worst trades in Los Angeles King’s history.

The Los Angeles Kings acquired goaltender Ron Grahame from the Boston Bruins for a 1979 first-round draft pick. Grahame had a good stint with the Kings, posting a 23-32-7 record, with 4.25 goals against average, and a .867 save percentage. With the draft pick, the Bruins selected defenseman Ray Bourque, who would go on to be one of the best offensive defensemen in league history. Bourque ranks first in points by a defenseman in NHL history. He won a Stanley Cup with the Colorado Avalanche.

One trade that had many fans upset, including the player that was traded, was the acquisition of Billy Harris and Dave Lewis from the New York Islanders. Harris and Lewis combined for 107 points in 349 games. Going to New York was Butch Goring, who would go on to have an amazing career and win four Stanley Cups. 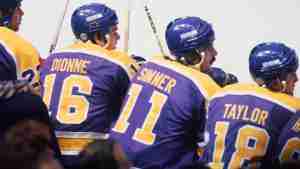 The Kings made another questionable trade with the Boston Bruins. The Kings acquired a first-round pick from the Bruins in exchange for left winger Charlie Simmer, one-third of the successful Triple Crown line. Simmer would score 98 goals and 94 assists for 192 points in 198 games with Boston. With the first-round pick, the Kings selected center Dan Gratton. Gratton played seven games in the NHL, all with the Kings, and scored one goal.

The Kings and Red Wings got together for a trade. Los Angeles received forward Jimmy Peters from the Red Wings in exchange for Hall of Fame goaltender Terry Sawchuk. Peters registered 31 goals and 29 assists for 60 points in 255 games. Sawchuk played 743 games with Detroit, winning 350 games while recording a 2.44 goals-against average, and a .904 save percentage. Sawchuk would win three Stanley Cups with the Red Wings.