The  Los Angeles Kings have recalled defenseman Jordan Spence and forward Samuel Fagemo from the AHL Ontario Reign. In another move, the Kings also sent forward Lias Andersson to the Reign.

Lias Andersson played most of this season for the Reign. In 12 games with Ontario, Andersson has five goals and four assists for nine points. Last season, Andersson played 20 games in Los Angeles, contributing one goal and one assist for two points. In his NHL career with the Kings and New York Rangers, he has seven goals and 10 assists for 17 points and 57 penalty minutes in 110 games. The native of Smogen, Sweden should be in the lineup for Ontario for their next game on Friday, December 2nd against the Colorado Eagles.

Forward Samuel Fagemo was recalled from the Reign to take the roster spot of Andersson. Fagemo played 15 games for the Ontario Reign, scoring six goals and two assists for eight points. In his AHL career, all with the Reign, he has produced 43 goals and 27 assists for 70 points, and 44 penalty minutes, in 110 games. He made his NHL debut for the Kings on January 3rd in a game against the Pittsburgh Penguins. Fagemo, a 2019 second-round pick (50th overall) by the Kings, is a pure goal scorer who has been offensively consistent. 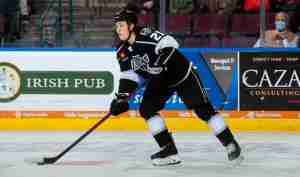 Defenseman Jordan Spence was also recalled from the Reign after he recorded one goal and 15 assists for 16 points in 17 games with Ontario. He made his NHL debut last season with Los Angeles, playing in 24 games and scoring two goals and eight assists for 10 points. He has NHL speed and can quarterback a power play with ease.

It was not clear how Fagemo and Spence may be used. Fagemo may be used as a 13th forward, while Spence may be the seventh defenseman. They also may play a regular role considering a Kings player may be playing with an injury.