Wednesday, February 1st, 2023
THE LATEST
Home Kings With Demotion, Could Kings Petersen Be on Trading Block?

The Los Angeles Kings last week placed goaltender Cal Petersen on waivers. He cleared waivers and was sent outright to the King’s AHL affiliate, the Ontario Reign. With this move, one question arises and that is could Petersen be traded?

Petersen has appeared in two Ontario Reign games, going 2-0 with a 1.51 goals-against average and a .947 save percentage. Copley has appeared in one game for the Los Angeles Kings, recording the win and stopping 31 of 33 shots in a 5-2 win on the road against the Ottawa Senators last night. 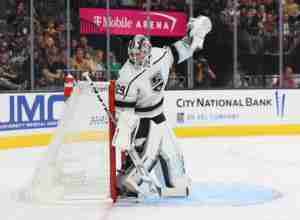 The question surrounding this move has been about Petersen and his future with the Kings. He has not looked good this year or last season. Petersen does have a modified no-trade clause and wonder if he will be moved if he continues to play poorly. He went unclaimed on waivers, most likely due to his contract.  If the Kings would throw in a prospect and pay half of his salary then a move could be in the works.

If Petersen can play well in Ontario and regain his form then the Kings could recall him if they think he is ready. he is now 2-0 in Ontario but if he starts to struggle then you have to wonder what Kings general manager Rob Blake is thinking about Petersen’s future. At one time, Petersen was considered the goaltender of the King’s future. Now we wonder if he will make it to next season. No longer a young prospect, he is fighting time to prove himself.