Los Angeles Kings goaltender Pheonix Copley has played so well since his call-up that he should be rewarded with a  new contract.

Copley signed a one-year contract with Los Angeles in the off-season for $825,000. He started the year with the King’s AHL affiliate, the Ontario Reign. With Kings goaltender Cal Petersen struggling, he was sent to Ontario while Copley was recalled to be Jonathan Quick’s backup. With Quick also beginning to struggle, head coach Todd McLellan went with Copley between the pipes and has not looked back on that decision since then.

Copley and the Los Angeles Kings are one of the hottest teams right now in the NHL. Copley has a record of 11-2 with a GAA of 2.56 and a save percentage of .904Although he is not amongst the leaders in any goaltending category, Copley is the sole reason for the King’s turnaround. Not only has he put the team on his back, but the Kings are also having fun playing hockey and are within just points of first place in the Pacific Division. 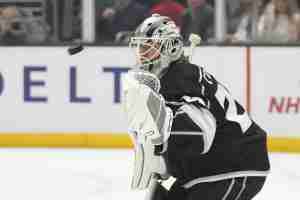 Copley and his current contract look like a bargain. At 30 years old, he was brought in to be one of the Reign goaltenders but now he is one of the hottest goaltenders in the league right now. Making just $825,000 Copley is due for an extension based on his play this season and what he has done for the Kings season. He has been the King’s best goaltender this season, albeit a small sample compared to Quick, and that is saying something because of the fact he has been playing in the NHL since December.

He has been impressive during his playing time that a future Hall of Famer is now on the bench because of his play. With the goaltending in question after this season, Copley could very well earn the right to be the starter next season. With Petersen struggling over the past few seasons and Quick getting older, Copley is right in the mix to be in consideration for the 2023-24 starter between the pipes.